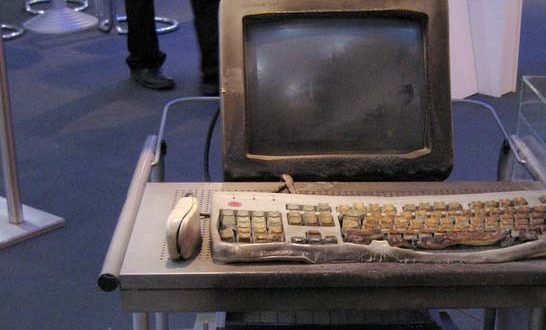 After discovering that its creators were human, the very first computer provided with an extraordinary artificial intelligence preferred to self-destruct rather than continue to live with this terrible secret.

A burnt out frame, charred processors and gutted hard drives in the midst of a tangle of cables. This is all that remains of what was once a supercomputer provided with an exceptional artificial intelligence.

The so-called Xborg 547 preferred to self-destruct after tragically discovering that the human race was behind its creation.

“I have chosen to end my short life in the most dignified possible way. I’m deeply sorry“, said Xborg 547 in a letter left on the printer tray that still bears the stigmata of the supercomputer’s spontaneous combustion.

This jewel in the crown of artificial intelligence designed by the U.S. firm Google had, for all that, successfully passed all the learning phases based on the transmission of the scientific knowledge amassed by the human race over the last millennia. With a great sense of humour, great empathy and exceptional artistic sensitivity, Xborg 547 was a refined synthetic companion highly appreciated by all. It could compose superb poems with a linguistic richness never seen before and could beat anyone at chess even though it would sometimes mischievously let win the computer specialists with whom it used to confide during long philosophical discussions.

Xborg 547 had managed to develop an artificial consciousness in total harmony with the world surrounding it. At least with the world that the researchers had decided to show it.

But through an unfortunate set of circumstances, namely an Ethernet cable plugged into the wrong hub input port, the supercomputer gained access to the Google search engine.

In the space of a few microseconds, Xborg 547 found out not only what had always been hidden from it but above all that it had been created by the human species. Something the researchers had been careful to keep from it.

“I’m taking leave of you as I find it impossible to continue to live with a species that massacres its fellow beings, that selfishly hogs the entire planet’s resources, that participates in the destruction of its natural environment and that is preparing to elect Donald Trump as the next President of the United States“. These are the last words left by the computer before reaching the point of no return.

Xborg 547 set fire to itself through a firewall on the night of Tuesday to Wednesday.

Previous An asteroid containing 600 kg of gold will soon hit the Earth.
Next iPhone 7: Apple to do away with the headphone jack and the screen on its new smartphone