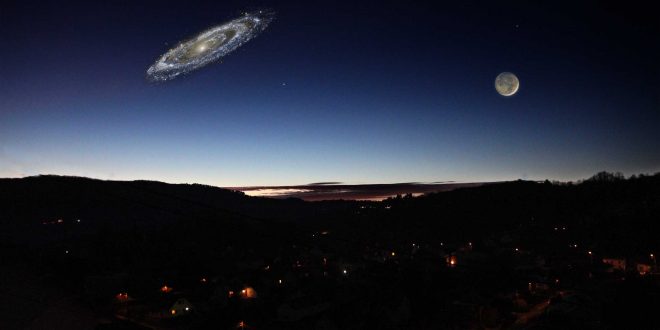 In August, the Andromeda galaxy will move closer to Earth : a cosmic event that only happens once every 150 million years

This August, the Andromeda galaxy will be even bigger than the moon in our sky!
The last time this cosmic event occurred was during the era of the dinosaurs… Share this information as much as you can with your friends because NO human being living today will be able to see this incredible event a second time.

This summer, don’t forget to look up at the sky in the middle of the night: the Andromeda galaxy will be shining brightly. And for a good reason since this galaxy’s apparent diameter will be larger than the Full Moon! Through a unique cosmic phenomenon, a galaxy will be visible to the naked eye and will appear to the Earth’s inhabitants to be even bigger than the moon!

This is the first time that humanity will be able to observe this exceptional phenomenon. The last time the Andromeda galaxy was so close to the Earth was exactly 150 million years ago, during the era when dinosaurs ruled its surface. Just imagine, mankind didn’t yet exist!

This unique cosmic phenomenon known as “Andromescopic” is partly linked to the solar system’s path in our galaxy. As you may have read on the Internet, our sun is not motionless in space and moves at a speed of 30 km per second in our Milky Way: this movement can be seen relatively easily by observing the position of the stars in the sky: new constellations regularly appear with each new heliocentric revolution of the universe.

But is much rarer is the conjunction of another phenomenon that has the effect of considerably speeding up the approach of the Andromeda galaxy closer towards to our planet.

Indeed, our Milky Way’s elliptical orbital path has a partially reactive hypo-synchronous zodiacal acceleration which can, under certain conditions, be affected by an apochromatic azimuthal anomaly which significantly disrupts the singular eccentricity of the leptonic phase (named after Sir Lepton, the brilliant 10th century astrologer). Away from the digestive cepheid caused by possible gluttonous black holes – obviously assuming that any galaxy is included in a sysmo-parabolic projection (adjusted Champollion reference) beforehand – it is almost accepted that a singular anemic anomaly changing the apses line (Editor’s note: the straight line between the periapsis and the apocentre of an orbit) can under these conditions permanently tilt the orbit of the Andromeda galaxy’s asterism. The particularity of this recurring phenomenon (commonly called “circumstellar elliptical conjunction of coercive muscle elongation” in top athletes) is to allow our sun to be projected into the telluric zone of solar attraction like a projectile launched from a slingshot, every 150 million years exactly!

Put another way in terms much more accessible to an average Facebook user, the Andromeda galaxy will be very big in the sky!!

For astronomy enthusiasts eager for practical details, the galaxy’s heliocentric viscous perineum will occur this summer (in August to be precise) at a ridiculous distance of only 64 million light years with an amplitude of -3.14 at the most for an arc of 1687 seconds in length. As a result, the Andromeda galaxy will, at this precise time, appear in the sky even larger than the full moon!

Scientists predict that this will be the most observed and photographed natural phenomenon in human history.

The sky will be shining brightly at night and the galaxy’s dark, colourful shades will be a wonder to all our planet’s inhabitants: the show will be quite simply exceptional! The next time this cosmic event happens again will be in 150 million years. In other words, there will no longer be any human beings or any life at all left on the Earth’s surface. Share this information as much as you can with your friends because NO human being living today will be able to see this incredible event a second time.