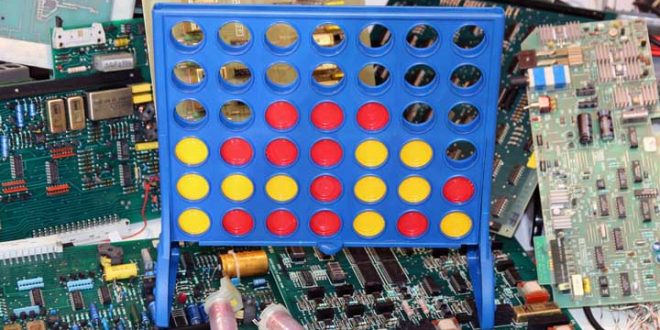 The Connect 4 world champion beaten by a Quebec computer

The Canadian Scott Tremblay, the Connect 4 reigning world champion, was beaten this week by the Quebec TERA100 computer developed by scientists at the Quebec Computer Institute.

This primacy of machine over man has propelled the technological advance of Quebec professionals to the forefront of the scientific scene in terms of research in artificial intelligence.

“When I first began to play against TERA100, I was sure I was going to win“, said the vexed former world champion.

“But after playing for 4327 minutes, the computer ended up grinding me down”

It should be noted that the Quebec computer, with its 100 Hz processor and its memory limited to 100 bytes, takes 2 hours 27 minutes on average to come up with a one-move solution.

Despite his five world champion titles and the seven litres of coffee he drank, Scott Tremblay finally fell asleep on the computer keyboard after an uncompromising three-day struggle.

The machine was declared as winner by default.