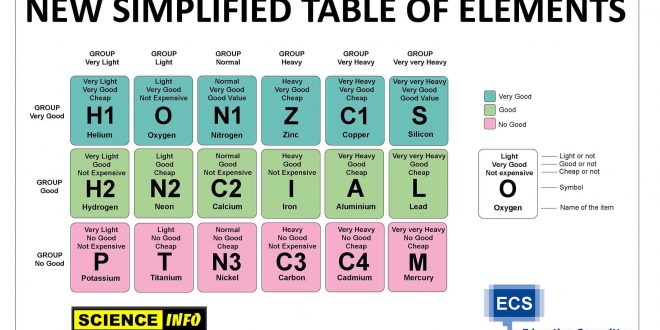 The education department simplifies the periodic table of elements

Too many elements to remember, too complex a classification and above all an impossible to pronounce name. There is no shortage of grievances against the periodic table of elements which was established in the last century by the Russian physicist Mendeleev. To make the work of teachers, students and scientists easier, the education department has thus decided to simplify it.

This table, which originally included 118 elements, will now only contain 20.

“There is no educational value in requiring students to remember the properties of complicated, rare chemical elements such as plutonium, strontium or whatever, knowing full well that it will never be possible, in reality, to handle, buy or even observe them”, said the Senator responsible for education.

The simplified table will now only include the 20 most common, easiest to understand, most accessible and most innocuous chemical elements. Out go all radioactive, carcinogenic or toxic elements or elements that are illegal or prohibited substances by law. The new table will only list the elements that a student could buy on eBay and handle safely.

The classification, deemed too complex, has also been simplified and extensively revised. The symbol of some elements has been renamed to allow its quick identification through the initial of each atom. Indeed, the old classification made for aberrations, sources of error and confusion among students. For example, the symbol Na was used for Sodium and K for Potassium. The symbols for these elements have been replaced by their initials S and P respectively.

The case obviously remains of elements with the same initials such as Copper, Calcium, Carbon, and Cadmium. These elements will be identified by the symbol C together with an index relative to their place in the table.

With the same view to simplification, the atomic, mass, molar and volume numbers have been replaced by a new, much more relevant and objective classification.

As indicated in the table in this article, the new simplified table of elements will be broken down on a scale with six levels ranging from Very light to Very very heavy and including two additional reading scales including categories classifying atoms using two intuitive criteria easily interpretable by students, namely: Cheap/Good value/Not expensive and Very good/Good/No good

In view of the positive reception of students – and prospective voters – discovering an easier to remember table, the department of education admits that is also considering simplifying the laws of physics.

Previous Killer oyster: a U.S. citizen among the first victims
Next An asteroid containing 600 kg of gold will soon hit the Earth.