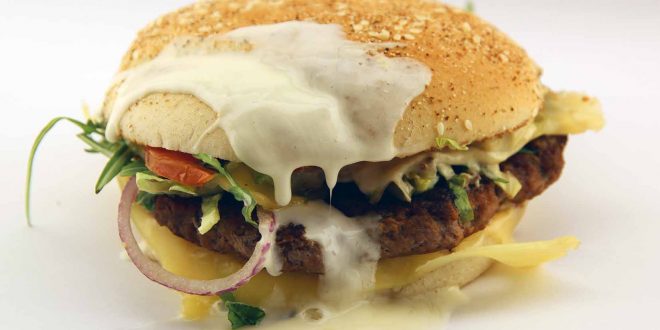 Secretly in love with a customer, the employee of a McDonald’s restaurant declares his love for her by slipping an intimate gift into her hamburger

The long list of foreign bodies found in hamburgers is enriched today by the delicate gift offered by a McDonald’s employee to a customer with whom he had fallen head over heels in love.

What man has never secretly fallen madly in love with a beautiful young woman? Some intrepid suitors will dare to declare their love to the loved one by offering flowers, perfume or passionate letters. Others, more timid, will choose to open their hearts by maliciously sending an anonymous pornographic email or delicately sliding intimate photos of their masculine attributes into the purse of the so longed-for darling.

With a discretion worthy of the greatest gentlemen, the young man disposed – neither seen, nor heard – of his little emission discreetly in the burger proposed to his bride before placing it carefully packaged on the hot inclined plate, where the invaluable gift of love awaited its recipient. Being a premature ejaculator and endowed with a particularly reactive libido, the audacious lover took only a few seconds to interfere, incognito, between the slices of hot and wet bread to deposit his precious seed with love and delicacy.

After a quick investigation of Madame’s schedule and eating habits, the unfortunate Casanova’s ploy was unmasked and the integrity of the young wife was reinstated.

This anecdotal case again enriches the non-exhaustive list of surprising substances found in hamburgers. After mice, teeth, fingers, condoms, excrement, cockroaches and syringes, this inventory can be proud to welcome a foreign body never previously discovered.

The management of the famous American restaurant chain, meanwhile, in an attempt to minimise the incident reminds us that it is – despite the urban legends peddled on the net – biologically impossible to get pregnant by swallowing human semen. And even if such a case repeated itself, the amount of substance received by consumers would be proportionally less than that ingested during intimate sexual practices. It is therefore necessary to know how to put things into perspective and take a step back in the face of this ultimately rather humorous and unusual incident.

Overwhelmed by being rejected by his crush, but especially disappointed at not having guessed the marital status of his sweetheart, the unfortunate bachelor server chose to resign and go and offer his cooking skills at the competitor Burger King, where his heart will surely beat again for young clients who are far, we suspect, from leaving him indifferent.