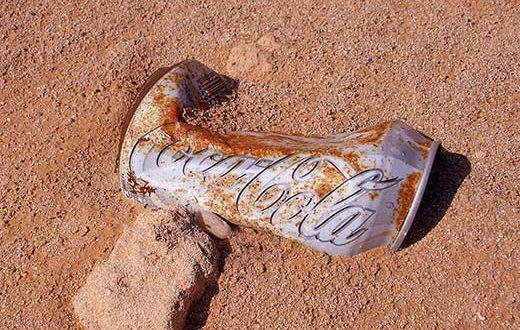 Signs of an extraterrestrial civilization discovered on Mars.

As an unprecedented event in space exploration, NASA’s Curiosity robot has just discovered the remains of an extraterrestrial civilization on Mars.

Laden with equipment and instruments, the Curiosity rover has been exploring the Martian soil in search of signs of microbial life for almost three years. Since landing on Mars, it has regularly unveiled its discoveries and photos of the planet using its onboard cameras.

And it was during a trek in an as yet uncharted area that the robot’s camera froze on discovering the presence of an object made by an alien intelligence.

Partially buried in the sand and with slight traces of corrosion, the metal object, before apparently being crushed and left behind by the alien owners, was cylindrical in shape and about ten centimeters high. Microbial analysis revealed that it is an aluminium container that contained a very sweet beverage.

The content of the drink tells us a lot about the alien civilization having carelessly abandoned this object during an expedition to the planet Mars.

When questioned, the Head of NASA’s space research had this to say about this discovery:

“It would be a bit premature to talk of alien intelligence. Leaving its waste on an uninhabited planet untouched by pollution says a lot about this civilization’s mentality. If you add to that the content of the traces of the drink analysed by the Curiosity robot, we can safely say that this alien civilization reflects a crass stupidity never yet seen in the Galaxy. Aggressive, mean, surly, taking pleasure in destroying its natural environment, massacring its fellow beings in armed conflicts driven by lust and the conquest of new territories, this civilization – if it hasn’t already happened – seems to be doomed to disappearing from the planet it has colonized. Good riddance. There’s no point in learning any more about it. The rocks on Mars have more empathy for their natural environment than these degenerate aliens”.

Previous A terrorist arrested with an explosive belt containing Samsung Galaxy Note 7 batteries.
Next Canada is building an emergency wall along its border with the USA to hold off Americans migrants.